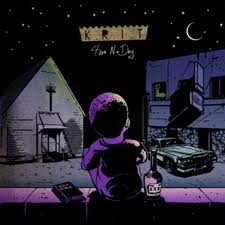 It was Spring Break and the weather is perfect. It's not too hot but, some how the sun is boldly shinning in Texas.  I cruised in my Honda Civic with the windows down as the music covered the inside of my car.  And every time the ride was over I refused to leave my car without the conclusion to a song off of 4 Eva N a Day.  The mixtape 4 Eva N a Day was released earlier this month by a Southern artist named Big K.R.I.T.  He is a conscious rapper with a country flair and a home grown hospitality. His music welcomes you into his world from the moment the intro starts pouring out of your speakers.

A sexy saxophone moans in the background on "Wake Up",  then you're transitioned to"Yesterday" where a soulful voice accompanies his simple chorus, next you experience a jazz background and verses on "Boobie Miles" that make you thoughtful (here is the video).  "4 Eva N a Day theme" is a feel good song, and the background vocals bring a certain euphoria into the mix,  "Me and my old school" makes you bob your head as if you were a southern pimp while the guitar molests your ear in the best way possible.

Upon hearing, "1986" it was apparent that he was inspired by UGK. It sounded as though Pimp C came back to bless the mic one last time. "Handwriting" has cozy instruments and it makes you sympathize with his frustration of being stereotyped as just a southern rapper without hits. "Insomnia" ironically can help you sleep because of the soothing guitar and his laid-back rap with a wonderfully awkward melody.

Because he sounds so similar to the late Pimp C, sometimes it seems like we've already been there and heard that. A couple of songs like "Temptation" "Package Store" and "Country Rap Tunes" fell short due to a lack of originality in his production. However, his lyrics in "Package Store" has a very distinct verse that makes him a certified story teller like his hero Ludacris.

Big K.R.I.T's songs are thoughts that go through his mind as he prepares for his major-album debut, Live From the Underground. The underlying message of his whole album is to give your all for your dream and take advantage of your time here on earth. A griot is what Big K.R.I.T is and his music proves it. As long as Big K.R.I.T realizes people want more from him then a lovey instrumental production, like lyrics that speak to the people, and bars we can feel then he will continue to have a growing fan base.  When he starts talking about superficial things like a players ball, gold diggers and hoes he can come off as a fraud. As long as he stays true to his own beliefs I predict Big K.R.I.T will meet his goals for his debut, and if he doesn't I pray that he takes his own advice and stands tall against the grain.

Posted by Take me to Tarah
Email ThisBlogThis!Share to TwitterShare to FacebookShare to Pinterest
Labels: music, My Weekend Rave