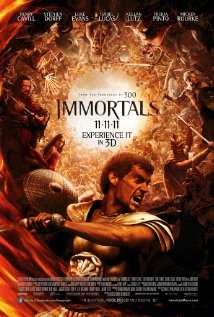 I love Greek mythology.  I beat God of War I on PS2 because I was so intrigued with the cut scenes and the story behind Cratos (The character you play).  Immortals is based on Greek mythology as well.
I was so excited to see the new movie Immortals that I went to a 12:05a showing.  Despite having only four hours of sleep that day, I was wide awake throughout the whole movie.
Theseus is the main character who is played by Henry Cavill.  He  is a mortal man who is chosen by the God's to fight for the good of humanity and on behalf of the Gods.

Mickey Rourke played an awesome villain. He played King Hyperion a power-hungry evil man on a mission to obtain a weapon that could destroy Greece.  I literally snarled at his character throughout the movie, as the opportunity to do so presented itself plenty of times.

This action packed ball-busting movie is wonderfully entertaining.  Immortals is jam packed with beautiful scenery and 3D technology that actually makes you feel like you're there. There were plenty of jaw dropping moments that amazed me, surprised me and even made me cringe.  Whatever you do if you see this movie, do so in 3D.

What is your weekend rave?
Posted by Take me to Tarah
Email ThisBlogThis!Share to TwitterShare to FacebookShare to Pinterest
Labels: Movie Review, My Weekend Rave, Tarah, True Story